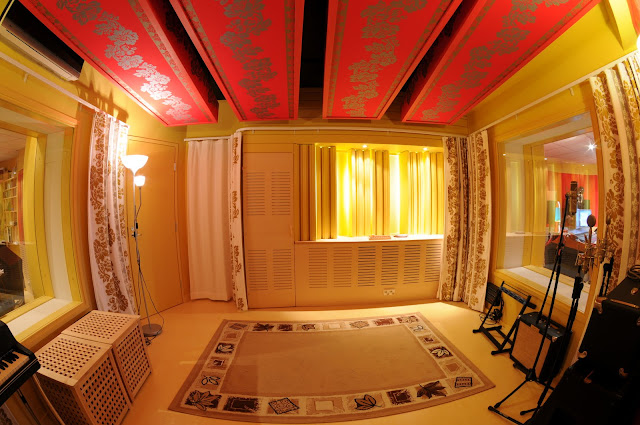 As we promised, it's here!

We at Studio Kekkonen - that is Julius Mauranen (me), Mikko Raita and Janne Riionheimo - were playing around with some ideas to celebrate our five years in existence (we all have made records for much longer, but these premises have been here since 2006) and do something fun. Our friend, producer, record label guy, radio guy, everything guy Nick Triani gave me the spark by mentioning that we could ask permission to use leftover tracks and post them on this blog (thanks for the push, Nick!). We developed the idea further by making little sessions with artists performing live in the studio, film and edit them with a modest, slightly homegrown fashion and put them out here. And that's exactly what we've done.

We will make these as often as we can, but as we are extremely busy here, it will be roughly every two months. Future artists in the series include Suvi Isotalo, Vesterinen Yhtyeineen, Delay Trees, Murmansk, Vuk, Iconcrash and Nuria. (+ Some other very nice ones we can't even talk about yet). More will be announced as the series goes on! Follow us on social media to hear about the series! Twitter, Facebook

But to the point! We are proud to present you the first part in our live session series! Enjoy!

Firstly, a big, huge thanks to Matti Johannes Koivu and his band for doing this! If you liked this, but haven't got his latest album, I suggest you order it right away from the M.Dulor label shop!

Secondly big thanks to O-P Komonen for his guerilla skills with the camera and editing board!

Big thanks to Kiiski for the pulla.

"Buddha" was originally recorded for Matti Johannes Koivu's fourth solo album, the brilliant, critically acclaimed Toisen Maailman Nimi (released on the M.Dulor label). The record was mixed by Julius Mauranen at (you guessed it) Studio Kekkonen. FWIW, Julius also recorded the acoustic parts of the album that featured the unique talents of pianist/harpist Iro Haarla and bassist Ulf Krokfors.)

The track, however, was left off the album at the very last minute. It was mixed and ready to go, but Matti with co-producer Tuomas Ilmavirta thought it didn't fit comfortably on the album after all. Matti also had second thoughts on the original arrangement and the decision was made to leave "Buddha" off the album.

This is the sort of thing that happens every now and then when making records, we have to proverbially kill our darlings that have been laboured over by a number of people for hours, days, even weeks. It feels bad at first - when you're making records with a passion, you fall in love with every great song you work with, but eventually, you realise it's for the greater good (i.e. it serves the artist's creative vision and the album entity) and live with it."Buddha" became one of those darlings that had to be laid down.

Luckily, we had another chance to make "Buddha" available to the world, and this time in a different form!

The session itself was a blast! The band were in top form, the atmosphere was really good and we had a great day. Besides, we had pulla. And everybody knows that you can't go wrong then.

After the setup (which takes quite a while when done right) - the band nailed the song on the third take. We had to do a few more to get some more video footage, but what you hear is take number three, unedited and without any overdubs (nor added sugar or preservatives and most definitely no monosodium glutamate).

Now as this session was the test drive for the whole concept and in hindsight there are a few things concerning the technical aspects of filming and marrying the sound to picture we should have thought a bit further beforehand. On the other hand, it is a new thing for us, so there's bound to be something that goes funny. But it turned out fine and the little things will iron out over time.

ABOUT THE RECORDING (Now there's just nerdy stuff ahead!)

The setup was such that the band (drummer Tuomo Laakso (who's also a visual artist!) guitar player Antti Rajala, and bassist Topi Karvonen) were set up in our live room. Antti's and Topi's amps were set up in other rooms (storage space and office, respectively) to avoid uncontrolleable leakage (the thing that happens when a microphone picks up the sound of instruments it's not meant to pick up). We put Matti in our other control room and his amp to another space - again to avoid leakage, mainly to his vocal mic.

So all in all, the four musicians occupied five spaces, but three people were in the same room. Sounds much more confusing than it is!

Matti wanted to hear some of the drums and his guitar acoustically (as well as through headphones) to feel more comfortable with the sound he hears - which is absolutely vital when recording - so we left doors a little open. We could control the leakage and how much he heard of the drums and his guitar with the door. Simple and elegant. The guy who invented the door probably didn't realise that it was actually a piece of recording gear.

Matti plays Finlandia instruments guitars into a Rikstone amp. The setup sounds amazing as it is. All there is to do is to capture what it is. This time I had the pleasure to record it using a Sandhill ribbon microphone. (All Finnish products, strangely enough!). The mic preamp I used was also Finnsh, Knif Audio V804 into a vintage dbx 160VU. He was singing into a Neumann U48, one of the most sought-after vocal mics in the world. The signal went likewise into an V804 and compressed with a handmade LA-2A clone.

Tuomo's drums were mic'd with two AKG C414-XLS's as overheads, an AKG D112 + a DIY subkick on the kick drum, SM-57 on top and a mad old Grundig lo-fi mic in the bottom (I wanted to try it and it sounded great!), toms were mic'd with Line Audio CM3's (very neat little mic!) and the room mics were Neumann CMV-563's with MK55 capsules (our M7 capsules are being reskinned at Thiersch Elektroakustik at the moment!). There was a Sennheiser MD441 on the hi-hat, but there was no need for it so it stayed muted. Oh, and underneath the ride cymbal was a Karma Audio K-Micro mic for giggles (they're tiny tiny mics and cost practically nothing). Well, we didn't need it either. All mics went through our heavily modified MS Audiotron Multimix with a little EQ here and there.

Antti's guitar is a beautiful old Hagström that he played through a Creamsound amp. That was mic'd with a SM-57 and compressed with a dbx 160VU. As with Matti's guitar, the sound is superb to start with.

Topi played a Fender Telecaster bass - something of a curiosity, but it sounded exactly right for the track (we tried a Precision bass too). This time instead of going to his Orange amp (that has a bottom end that could start wars), we chose to use a Music Man 65 that could be driven a little more with less seismic action. The cab was an Ampeg 1x15, mic'd with a Shure SM7B (I never tried it on bass before this, but I can highly recommend it!). There was a BSS DI signal too.

The whole sound was there right away. All I had to do in the mix was to make it glue a little bit more and add a little reverb on the track and do a little general sweetening. I compressed the drums a bit with our Gyraf G10 compressor, Knif Audio Vari-Mu, and a dbx 160VU. I squeezed the ambience mics with an Alesis Micro Limiter (wonderful lofi thing). On bass I had a Rantanen 1178 clone. On guitars I only had a touch of parallel compression (Rantanen LA-4 clone) and vocals were further compressed with an LA-2A (I can't get enough of it, can I?). I used a Roland Space Echo inserted before our Stocktronic Plate for vocal reverb and for guitars I used the one-of-a-kind Knif Audio K.Verb spring reverb. On the master I had a little bit of EQ from the magic stereo channel of our desk, light compression from the G-SSL and some saturation from real tape (Otari MTR-10, 1/4" RMG 900 at 15ips). Some plugins were used, mainly for EQ and a little help for the drum ambience from a convolution reverb, the Waves IR-L.

There was no mastering on this particular track, I brought up the volume a little bit to save you the trouble of touching the volume knob.

I hope you all enjoy the track!

Julius
Posted by Studio Kekkonen at 22.45